I am so beyond tired. I’ve worked for seven consecutive days so far. Can’t wait for next weekend to roll around so I can rest proper. Tomorrow is THE day. That is if they don’t try to play punk with us again.

There’s been tons of stuff going through the grapevine, but what I can tell you is that they have already decided on four out of the five. They are still deliberating over the last one. And apparently, HR said that according to the Ministry’s guidelines, anyone who has been employed for less than three years will not be given any form of compensation. Well, fuck me. And fuck you.

Guidelines are named as such. They are meant to act as a guide but is not THE word. Are you trying to say that I have not contributed to the company the last two years? And telling us the selection process is based on four criterias. Come on. I easily won in two, are you implying that I did soooo badly for the interview that it blanked out my performance and years of service? The ironic thing is that I am ranked third out of ten based on performance alone. The two above me are safe, and two way below me are too. Fuck you, what am I, chopped liver?

Other than anger, the emotion I feel most is disappointment. I feel liked I’ve been fucked over. And I have also come to realise that loyalty to a company is the dumbest thing one can do. I’m the perfect living specimen.

Luckily for me, I have other attributes to fall back on. I have been offered a job by the other company. I will still have to go through the interview process fair and square but at least I know that I have a slight upper hand over other candidates because I have received good reviews from the reps to the manager to the boss and from one of my customers. I cannot say for sure that I will take it up because I need to objectively analyse more factors and not take it just because I need a job (even though I really do). Will update once I have more.

Remember my eye appointment? Well the eye doctor checked and found nothing wrong with my eye and said I have nothing to worry about so, phew!

Through this whole stressful period, X has been consistently (though fairly sporadically)  been like a pillar of support. We are still not meeting till December (booooo!), but he has been around. He remembered when the day of the original announcement was supposed to be. He gave me encouragement. He called when I needed to talk. He makes me feel like a prodigy with his praises. He is still strange sometimes though, no change there. 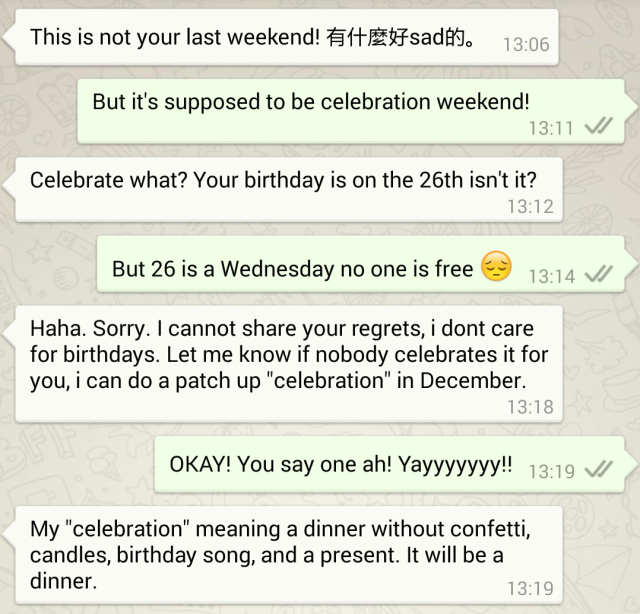 I was lamenting how tired I was from working and how I have no energy left to celebrate this weekend when he sent this. Music to my ears! Or more accurately, amazing visual spectacle to my eyes! Also, I definitely need to work on being such an eager beaver. I actually contemplated editing my response because girl! You reek of desperation it’s bordering on embarrassing. And it’s only dinner, not a plane ticket to go around the world. Exercise some self-control please woman.

I was right though, there would be zero surprises involved but still! The fact that he actually remembers which day my birthday falls on is already a miracle in itself. He has said that he’s very bad with dates and he doesn’t remember birthdays because he doesn’t think they are a big deal in the first place.

And I love how upfront and practical he is about things. Suits me just fine. In fact, I’m extremely relieved that he’s nowhere near being the romantic sort because I don’t know how to react accordingly. I’m awkward with being romantic. Both receiving and giving. I just cannot do stuff like that.

So even though things have been bleak in general recently, it seems that change might not be a bad thing after all. I don’t ask for a lot in life, but just no surprises please.

My fate might change at 2pm tomorrow. Break a leg, Sab!